Ever have those moments when you wonder "Are you really my kid?". I mean, I gave birth to her and all, but sometimes, I just have to shake my head:

Then there are moments where I totally know she is my kid:

And then there are moments where even I think she's sweeter than I deserve: 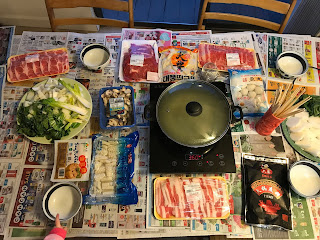 So it's hecking cold AF and I don't know of anything better than a ton of hot spicy broth and an unlimited amount of food to put in that spicy broth.

First off, I can't find my favorite hot pot packet locally, which is Lao Gan Ma - if anyone sees it at either of the Asian grocery stores, lemme know because I can't find anything with that same kind of kick. 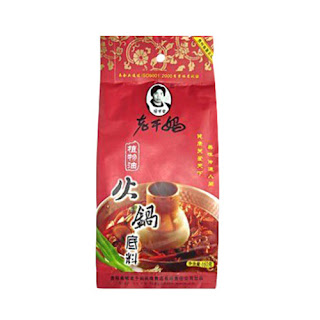 She knows what's up with the broth.

Okay, any way, back to hot pot. I had friends new and old (Phairhead and her SexyBeast, what's UPPPP) to eat some of this hot goodness, and let me tell you why doing hot pot at home is awesome:

One of the new folks that came over had never had hot pot before, so that was cool that he got to try it. Annoyingly, both of the Asian grocery stores were kinda lacking when it came to sliced meats, which is INSANE because it is the middle of winter, which is primo hot pot season. Up your game, Albany!

And yep, you can make out the Boop's little finger pointing to a bowl up top. Gotta start 'em young!
at January 24, 2019 No comments: 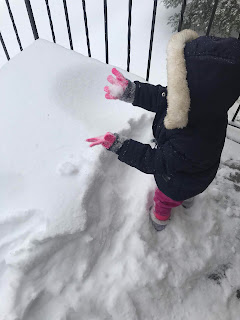 Kiddo loves the snow, even when the windchill brings it -5 below.

There are no sick days for parents, but Baby Shark on loop as my little sidekick requests, snacks in bed, and cuddles are a pretty good second to a sick day and actually sleeping.

There are so many moments I used to get anxious about:

And now that we're in the potty training stage, well, I've embraced a few things (Uh, this'll get kind of squicky for anyone who is easily grossed out by potty training, so feel free to skip ahead):
Are there parents that don't get sick of stuff on repeat? Kiddo has watched Baby Shark about eleventy billion times, and I find it kind of comforting, and she's starting to learn repetition and patterns from it, so it seems to have a little value.

Marie Kondo - that series was really sweet. She's the lady that says to get rid of your extra junk and only keep stuff that "Sparks Joy". I basically had to do that when I moved, but it's nice to see other forms of media and celebrity encouraging less stuff, and to have your kids help out. Kiddo's not quite 2, and I've made sure she sees me clean and knows how much I like a tidy place, and she'll now help me put away dishes and put dirty dishes in the sink.
at January 21, 2019 No comments: 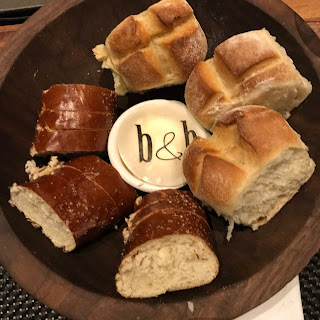 Black and Blue is still one of the "newer" upscale steak houses in Albany. It's modern, sleek, and on the formal side, but without airs.

And they have pretzel bread. HELLO.

Service was attentive, polite, and efficient - my ideal for an upscale steakhouse. 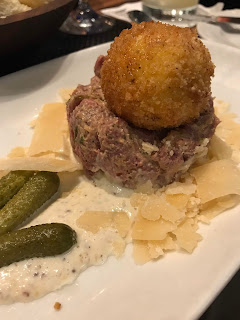 Steak tartare is one of those dishes I *have* to get when I see it on a menu. I prefer my tartare as more of a rough mince than a thicker dice, and the generous amount of cheese made absolutely no sense to me (do people like tartare with cheese?). I'd probably also dial back on some of the aioli, as I want more of the raw meat flavors to come though. If the meat's good, you don't need to dress it up with so many accessories. All of these opinions make me sound like I didn't like it, but it was quite good. Just some minor tweaks, or personal preferences.
That said, the truffle oil and 5 minute poached egg were phenomenal additions. Holy smokes - great combination.

Pair this with some fries and you've got yourself a great bar dinner. And let's be honest, I probably could have just stopped right here and had a perfectly content night out, except... 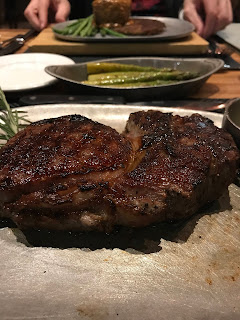 The 14 oz Ribeye ($48) was cooked exactly to temp as requested (medium rare, thanks!). I find it so hard for most restaurants to nail medium rare through and through that I usually order rare and wind up getting something a little over medium rare. But not at Black & Blue. Medium rare is medium rare. 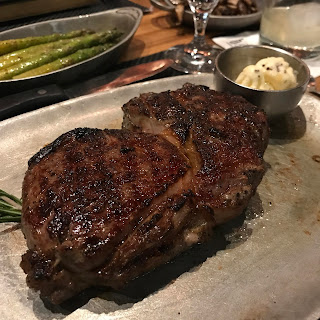 Black & Blue's house rub is mainly salt, pepper, and some rosemary notes, which go very well with the steak. I gilded the fatty lily with some truffle butter, because we all know ribeye steaks don't have nearly enough fat on their own. Amirite? 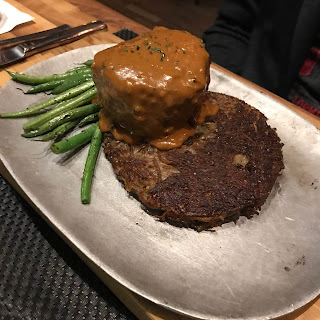 The pepper sauce was a bit of overkill, as Black & Blue does a beautiful job with the meats on their own. 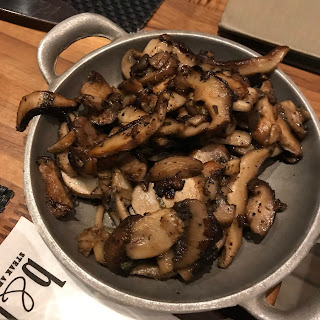 A side of wild mushrooms ($8) with tarragon, onion, and shallot because I simply cannot resist any dish that includes tarragon or shallots. Combine the two? I'm in.

Great firm texture on the mushrooms. A solid side. 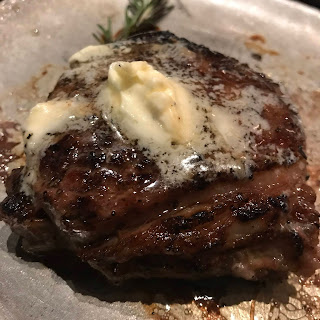 I'll likely give their crab a try next time, though it'll be hard to stray away from the excellently prepared steaks.

Random thoughts from a single mom: