I went to Troy to grab a few nibbles recently. 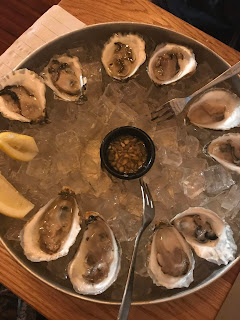 Went to Plumb Oyster Bar to try a few of every oyster on hand. These ranged in price from $2.85-$3.00. A once in a while kind of place for me, but it's nice to change it up every now and then and try different varieties of oysters.

I didn't grab a photo of the brussels sprouts, but they were smashing. Nicely roasted and charred halves that were covered in a balsamic sauce with crushed toasted hazelnuts. Really well done texturally. 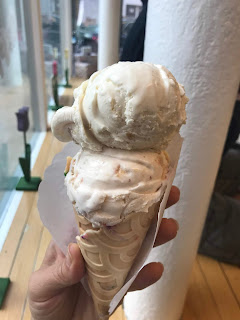 Dutch Udder for ice cream. Cinnamon Toast Crunch on top, strawberry oreo below, both scooped into a birthday cake ice cream cone. Two scoops was a bit much for me, but I powered through it. It also helps that the flavors are rich, balanced, and well crafted. I'm normally not a cone person, but their craft cones are thin yet sturdy and maintained structural integrity throughout the half an hour or so it took me to eat these two massive scoops. The only tweak I'd like to see is for the cinnamon toast crunch bits to stay crunchy in the ice cream, as it came out a bit on the soggy and chewy side. Or maybe leave out the bits entirely. But oh that flavor. Forget cereal milk. Cinnamon Toast Crunch ice cream is where it's at.

Thanks Troy - it was nice to be back. If I had more time, I'd have rounded it out for dessert at The Confectionery. I really like how walkable downtown Troy has become.
at August 17, 2018